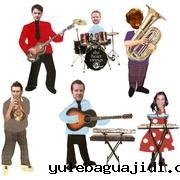 The Heart Strings are a North London based musical collective who have been making records when the mood strikes since 2007. Debut album ‘Try Fly Blue Sky’ was released on Grandpa Stan Records in 2008 and was a Rough Trade Album of the Year. Sophomore full length ‘Flap Your Crazy Wings’ was first released digitally in July 2011 and re-released physically as a Rough Trade Album Of The Week in early 2012. Their latest offering is b-sides/lost songs compilation ‘Songs That Got Lost In The Clouds’. The band are currently scheming to build a recording studio in their attic and hope to be up there working on new material over the summer.